I completed my last Level 2 course a few weeks ago and signed up for Level 3 at the end of July. I don’t plan to get stuck in properly until September as I have both a holiday and trip to the Arles festival coming up in the next few weeks, both of which might provide some inspiration for what follows.

However I owe Garry, my Contextual Studies tutor, an introductory email, next week I have my first video chat with Wendy, my Body of Work tutor, and this afternoon I am attending my first Level 3 student hangout – so this seems like a good time to jot down some initial thoughts, impressions and ideas before starting in earnest. If nothing else it will give me something to smile at when I re-read it at the end of the course.

I presume this is a common reaction but the open-ended nature of Level 3 studies seems like a bigger step up than that experienced between Levels 1 and 2. I look in awe at the work of existing and previous Level 3 students and wonder how long it takes to fashion one’s nebulous ideas into something approaching the fully-formed work that appears at the end of the course. And frankly, whether I’m good enough to match the standard I’m seeing.

… but I already feel more supported than I expected

I’m very pleasantly surprised at how much support I’ve already had from other students. It feels like everyone experiences a little of the trepidation and loneliness of the self-directed study model, and people have evolved their own support mechanisms to cope. I’m looking forward to taking part in the student-driven hangouts, and I’ve also been very heartened by messages of support and advice on the Level 3 Facebook group and via direct messages from students that I only know online. I’m already feeling less alone.

I entered Level 2 thinking I quite liked the idea of documentary photography yet completed the Documentary course deciding that the genre isn’t for me! I spent the last month or so thinking about what kind of photography excites and interests me, partly by looking back at the assignments I’ve done over the last four years with OCA.

Interestingly, most of the projects I’m particularly proud of aren’t from Level 2 but from Level 1, specifically Context & Narrative. The line that runs through them is that the work was quite personal, expressive, sometimes introspective, sometimes ambiguous – and in all cases I was speaking for myself. I covered subjects like photographer’s block, dislocation and career dissatisfaction.

On Level 2 I felt a sense of achievement on a few particular assignments: for Gesture & Meaning assignment 4 I evoked the public grief following a terrorist incident by weaving the names of the victims into touristic street scenes in a ‘magic realist’ way. 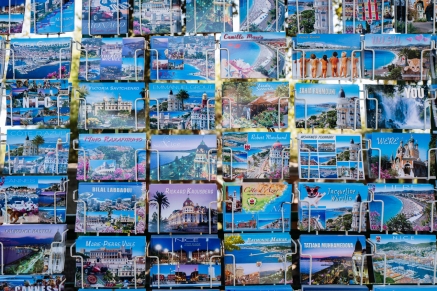 I realised during Documentary that I’m less keen on telling stories than I am on transmitting ideas, or evoking sensations. I feel uneasy speaking on behalf of other people for the risk of misrepresenting them, and get a lot more satisfaction out of finding ways to express something I’m thinking or feeling.

I have some ideas on a general theme for the Body of Work major project and the associated Contextual Studies research, and I will cover these in a separate post shortly.

That’ll do for now.