Roger Ballen: the House of the Ballenesque

As freaky as you’d imagine, if you’re at all familiar with his style; it’s like being inside a Ballen photo. In fact, the whole thing feels like a Being Roger Ballen theme park attraction – set your camera to high contrast b/w, point it anywhere and voila, your very own Ballen! It’s barely photographic in the traditional sense: a couple of prints adorn an upstairs wall but the rest of it is what I think we used to call a multimedia experience: sculptural installations, projected animations and unsettling audio. 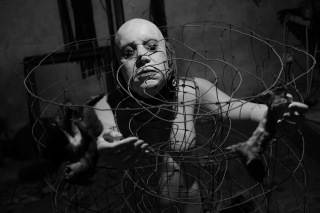 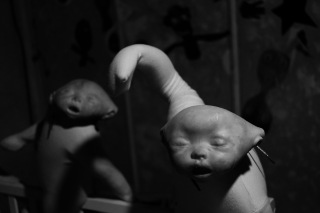 Ironically given the nightmarish subject matter (dead bodies, screaming babies, taxidermy), it comes across as playful, silly almost – it’s bordering on self-parody. Straight after it I announced it was my early highlight of the festival, but as time has passed I think this was a sensation like a sugar rush from a bag of sweets; now it’s fading from memory without making a lasting impression. It was fun though.

However, one discordant note almost spoilt it: at the end of the route through the house is a video by Mr Ballen explaining the genesis and development of the idea, including his encounters with the original owner of the house some years ago. But it felt a little like letting daylight in on magic – it took you out of the experience you’d been immersed in. It’s like being made to watch the DVD extras over the end credits of a film – some people will like to know how or why it was made, others won’t. In most exhibitions such a video or audio explainer is optional, off in a side-room, and I usually avoid them so I can experience the work on my own terms, but here Ballen makes the Making Of video harder to avoid.

The lingering takeaway from this isn’t directly about the installation itself but rather my response to it. It’s fascinating how one’s memory of something can be distorted by prior and subsequent knowledge: my lingering memories of this house are in black and white, as that’s what I associate with Ballen and that’s how I shot my own photos of the place.

So when I subsequently saw publicity shots that proved that I had actually experienced the house in full colour, they didn’t look as ‘real’ as my b/w memories! I reckon this feeds into my ongoing investigation into memory and photography, somehow.