I’ve been back from my Arles trip for a couple of weeks without posting anything on here, as it seemed to take a while for me to digest what I saw at the festival and filter my own work-in-progress and developing ideas through some of the observations, inspirations and realisations that I gleaned from the photography I saw out there.

At this (still early) stage in my Level 3 journey I have a short but important to-do list:

I’ve made a conscious decision to start with the last item on the list: I want to get some of my ideas worked up into mockups as quickly as possible, before my mind is further influenced by the work of others. I will almost certainly revisit some of this before submitting Assignment 1, but it feels right to go with the flow and crack on with some photographic work at this point.

I decided a while ago on my area of interest: memory.

At the moment I’m further narrowing it down to the fragility of memory – or maybe you could call it the opposite of memory: forgetting.

What I haven’t got yet is a grip on the kind of subject matter I want to be in the photographs, but I’m OK with that so far, as I’m getting most satisfaction out of formal experimentation.

My current thinking is based on manipulation of existing photographs, both digitally and physically. All my experiments so far have been on two specific photographs – one deliberately nondescript new photograph and one more personal archive shot.

What I’m seeking is a way of depicting forgetting. I want to visually represent the experience (sensation?) of missing information from your memory. I’m looking for visual metaphors.

About a month ago I did a couple of quick mockups of images as a starting point.

Both of these were intended to depict a process of forgetting, from the event to the loss of the memory of it. However, in hindsight this doesn’t really work – memory can fail instantly (never stored) or intermittently; it doesn’t feel right to treat forgetting as a process.

Also – frankly they are way too busy visually.

So my next experiment was to strip this idea back from multiple in-between steps to a more simple beginning state (the event) and end state (the forgettance – yes, I know that’s not a real word).

I also wanted to try moving away from the Photoshoppery of the initial experiments and get into the physical world, with actual prints being messed about with…

By using a more personal archive photo I wanted to get across the sensation of forgetting a face, or forgetting an important event from the past.

What I’m trying to do here is subvert the idea that a photograph can help you recall a event – if the supposed focal point of the image (e.g. a face, in a portrait) is missing, it disrupts the viewing experience in a way that jars – in a manner similar to being unable to remember something.

The stepping stone idea was this: a 6×4″ print with a faded instant film print stapled to it.

This sparked a few more ideas on physical manipulation of the print to simulate forgetting: 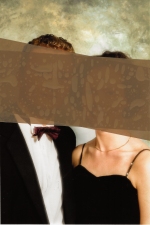 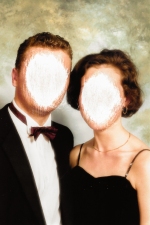 There is however one issue with these physical approaches (maybe not 1, more likely 2-5), something my wife brought up: the physical damage implies some kind of angry intervention, and given the romantic ambience of the original, rather than evoking memory loss, they may inadvertently evoke a bitter relationship breakdown…! This may be a reason not to use such subject matter.

And back to digital… 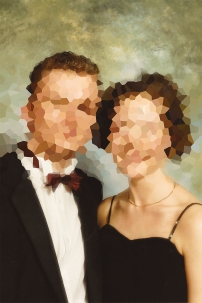 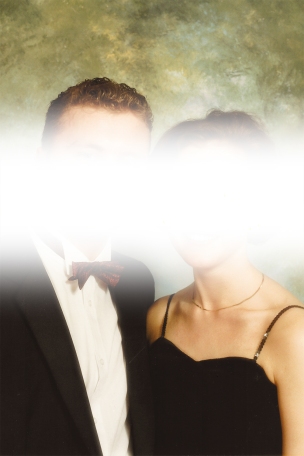