My ‘Memory Waves’ series of portraits had a brief outing last weekend.

Musical Memories, the singalong group whose members I took the singing portraits of, held an Open Day on Saturday 19th May. It was largely an event to raise awareness locally of the benefits of group singing activities generally and the activities of Musical Memories specifically, and the timing was chosen to coincide with the start of the national Dementia Action Week campaign.

As part of the day, alongside singalongs and lots of tea and cake for visitors, the 10 sound wave portraits that I submitted for Assignment 2 were displayed on the walls. 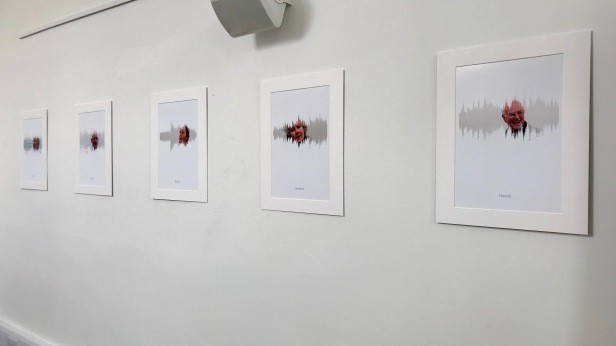 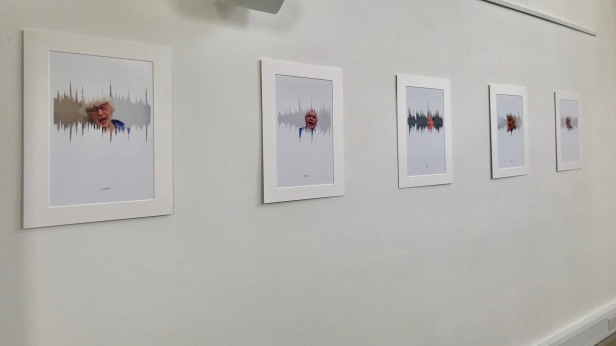 About three dozen people came along – actually a lot more than I expected bearing in mind the day ended up clashing with both the Royal Wedding and the FA Cup. One pleasing aspect of the day was that it took place in the same venue as the singing sessions that provided the source materials – there was a nice circularity to the whole thing. I dropped in for an hour or so and chatted to some of the visitors about the work – good practice for SYP!

I also had the chance to catch up with some of the portrait subjects, most of whom have taken their own portrait home in return for a donation to Musical Memories. It’s the first time I’ve had such a direct response from subjects, and I was pleased to find out that the presentation method (the sound waves) worked well with everyone that I spoke to – I had had a slight concern about whether everyone would ‘get it’ or wonder why I hadn’t just done straight portraits – but this concern did not come to pass (not with the people I spoke to, anyway).

Another thing that made me smile was that, by huge coincidence, an OCA tutor (Bryan Eccleshall) was holidaying nearby and just happened to be on the same street as the Open Day during the hour I was there! So he popped in with his dad for a look round.

Bearing in mind that I’ve decided not to take this particular idea forward through my Body of Work, this little one-off exhibition felt like a very appropriate point of closure.