Photo London is predominantly an art fair more than a photography festival, although there are a handful of key exhibitions as part of the programme. Most of my time there was however spent visiting the plethora of individual galleries / dealers to get a feel for what’s going on in the contemporary photography market. I had a standard response ready for when a optimistic salesperson asked me if I wanted to know any prices: “I’m here for inspiration, not investment!” :-)

I met up with another OCA student, Alan Bulley. As ever it’s incredibly useful to see events like this with someone else, to discuss what you’re seeing and often to discover something that you hadn’t noticed yourself.

This isn’t an exhaustive review of the whole fair, but rather some thoughts on my highlight and some observations of what else I was drawn to, with thoughts on how I might incorporate some of the inspiration into my own work.

Burtynsky was Photo London’s ‘Master of Photography’ for 2018, and the exhibition stands head and shoulders above the rest of the work I saw on the day.

His work is concerned with industrialisation and environmental impacts, and some of what was on show is part of his ongoing project Anthropocene, in advance of an exhibition in Canada in September this year.

The images are vast in scale and in physical presentation. The newer images are composites of multiple drone images, giving almost surreally broad vistas of particularly problematic parts of the planet. 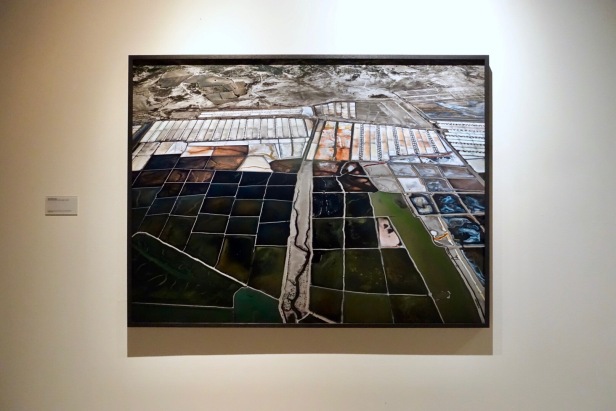 For me the images work on multiple levels. Purely visually, I first of all found the abstraction of the wide views really appealing, then when I looked more closely this was augmented with a sense of awe at the scale – seeing, for example, a truck appearing like a speck in the landscape makes your spatial awareness suddenly snap to a new scale. You can get lost in some of these images, such is the minute detail. The switching of focus from macro to micro is close to illusionary. I found myself moving backwards and forwards in the gallery space marvelling alternately at the vastness and the tiny, human-scale details.

Beyond the visual, once the scale aspect sunk in I got a shocking sense of what these images are really showing – how much damage we’ve inflicted upon the planet. It kind of slaps you in the face. I’ve just finished reading Sapiens: A Brief History of Humankind (2011) by Yuval Noah Harari, which goes into some detail to contextualise just how much the human race has done to hegemonise the planet – these photographs are visceral visual evidence of the darker side of human dominance. As my study buddy Alan eloquently put it, the images are both “beautiful and horrific” (as it happens he said this to Burtnysky himself, who coincidentally wandered up to one of the images while we were talking about it; he was quite happy to chat to us for a couple of minutes).

My main takeaway from the Burtynsky show was how it’s possible to get across incredibly serious messages whilst still maintaining an artistic eye, producing visually arresting work. The subject matter is somewhat different but the work it reminded me most of was Michael Wolf’s ‘Mega Cities’ projects – it’s a similar use of graphical language to abstract large scale environments to comment on humanity.

Of the many galleries plying their wares at the fair one could hugely generalise and say that it’s a fairly even split between historic / traditional photography by established names (with corresponding established market values) and contemporary work by a variety of names, the majority of which are new to me but presumably are already making a splash in the market. My personal interest and sources of inspiration are very much in the latter category – I can only get so excited about seeing, say, an original Brandt print, but for me seeing contemporary practitioners pushing the boundaries of the form is a much more thrilling proposition.

In a fair as eclectic as this, my mind finds patterns in what I’m seeing. What stands out tends to be related to whatever aspect of photography I’m particularly thinking about at the time (I recall last time I came to Photo London in 2016 I was fascinated by portraits where the face was obscured – armed with this obsession, I saw it everywhere I looked).

This time I was seeing everything through the lens of my current photographic obsession, namely the use of shapes as a graphic device. Almost all of the artists and individual images I found most interesting had some element of incorporating shape into the work (this also goes for Burtynsky above).

Shapes as subjects in themselves (Hideo Anze)

I came away buzzing with ideas on how to incorporate shapes into my ongoing work – I used shape as a key part of Assignment 2, and although I’m not pursuing the basic concept of that assignment for the remainder of BoW, I do think that using shapes might be the significant aspect that I will take forward in the remaining work.

My favourite image at Photo London this year

So despite what I just said above, the one photo that I loved the most is neither contemporary nor based on shapes. It’s a surreal 1960s shot by Melvin Sokolsky that depicts a socialite flying through the air at a posh dinner.

There’s so much to see in it – the jaunty angle, the faces of the oblivious diners, the joyful expression of the leaping lady, the carefree outstretched arms, the blur on the kick of the heel – it’s amazing. I don’t know (not sure I want to) if it’s real or faked – although if it’s real, I’d love to know if she was OK when she landed! ;-)

Whilst we did spot a few famous faces – Burtynsky, Martin Parr, Bruce Gilden, Nick Rhodes of Duran Duran – I was actually most pleased to randomly bump into Helen Warburton, my Gesture & Meaning tutor from a couple of years ago! It’s the first time I’d met her in person (and only the second time I’ve managed to meet any of my tutors in real life, as it happens) and it was a really pleasant surprise to recognise each other from Skype and have a good catchup.

I hope Helen won’t mind me saying that she’s been the most influential of my tutors so far in terms of how much my practice developed over a single course – in particular I appreciated her attention to the working process and her challenges to me on thinking about not just what I produce, but how I produce it. Bumping into Helen was a really good reminder of how far I travelled over the whole of Level 2! So thanks again, Helen :-)