In my Assignment 2 tutorial my tutor Wendy suggested four particular projects to look at as part of my continuing quest to pin down what aspects of memory interest me. To these I added a fifth, Bate’s Bungled Memories, largely because I came across it at around the same time as the tutorial and in my head I bracket it with the other four. Over this and related blog posts I will look at each of these projects in turn to identify points of potential inspiration and/or to assist me in refining aspects of memory that interest me most.

Keith Arnatt was an idiosyncratic British conceptual artist working mainly but not exclusively in photography from the 1970s to the 2000s). Martin Parr described his work well in a Guardian feature shortly before Arnatt’s death:

“All his series of photographs were taken within striking distance of his home near Tintern in Wales […] or, like the notes, actually in the house. He found pleasure in everyday objects – notably in exploring his local rubbish tip. He went on to make simple still lives of cardboard boxes, abandoned paint tins and other objects he found there.” (Parr 2007)

This set of 18 images (normally titled Notes from Jo but sometimes referred to as Notes from my Wife) is a very simply executed idea: photographs of notes left by his wife between 1991 and 1995. 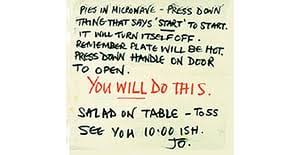 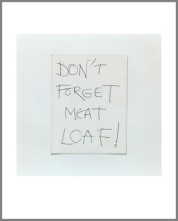 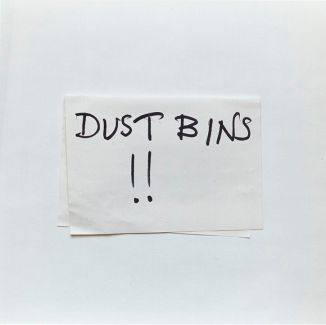 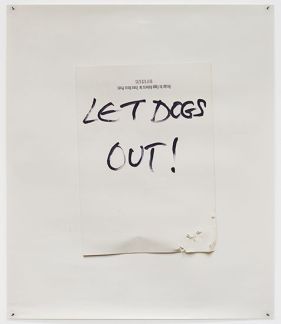 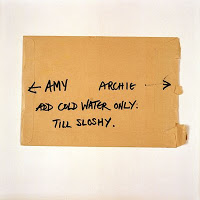 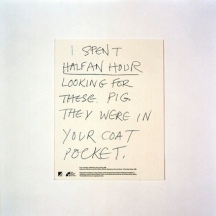 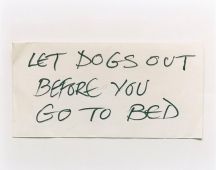 The poignant backstory is that Jo was ill with a brain tumour though this period and died in 1996. With this in mind there’s a possibility that there was, for Arnatt himself, a memorial aspect to the project – making this work doubly about memory, albeit two different dimensions of memory.

About half of the notes are reminders of some sort, with the remainder being a mix of more neutral messages and occasional outbursts (“You bastard! You ate the last of my crackers!”). The sense I got was of the relationship between Keith and Jo – him exasperating, her exasperated; him creative but absent-minded, her running the show behind the scenes because she knows that he can’t. It’s quite endearing, and – uncomfortable as this may be for me to admit – it closely resembles the relationship between me and my wife!

So I really identified with this particular aspect of the work; it illustrated a small aspect of day-to-day life that is very rarely examined in art or any other form of analysis: forgetfulness.

Arnatt was, as Parr noted above, adept at isolating small details of life and making them noteworthy simply by that isolation. And I’m a big fan of anyone that can make an interesting photograph from uninteresting subject matter. In gallery installations the notes are framed and some are blown up to many times their original size. There is the cliché that any photograph is art if its printed large enough, but to me these do work well enlarged as they cease to be notes and become images.

But more than that – in a parallel fashion Arnatt didn’t just isolate and enlarge objects, he did the same thing with intangible aspects of daily life (feelings, moments, relationships). He didn’t just hold up a handwritten note for examination, he held up a strand of his relationship with Jo, enlarging the small, unremarkable gestures that say ‘I love you but you don’t half get on my nerves sometimes’.

The other reason I really like this work is its humour, often lacking in much conceptual photography. It’s the humour of real life: everyday, unforced, personal.

Looping back to why I said earlier the work is doubly about memory: I believe that Arnatt was remembering Jo by remembering times she tried to get him to remember things (!). So memory is both subject matter and viewing experience.

Most memory-related photography projects I’ve found have been concerned with memories – the contents of a memory system – whereas Notes from Jo is concerned with (among other things) memory as a system. More specifically, it is concerned with bad memory (not ‘bad memories’) – i.e. forgetfulness, absent-mindedness. This is exactly my own area of interest! So Arnatt’s project is the closest thing I’ve found to the spirit or intention of my own work-in-progress (the lost gloves project).

My other observation was that this has similarities to Bate’s Bungled Memories (2008) in that it uses a combination of tropes from typology and still life to examine memory – potentially signifying the repetitive, looping nature of memory lapses?

Finally, in a quietly profound way I have a new appreciation of how one can use photography to engage the viewer in thoughts of small, everyday sensations. Not everything needs to be deep and meaningful. The smaller moments in life tend to go unexamined, but Arnatt has opened my eyes to a subtler form of photographic message.