I’ve been taking photos of lost gloves for years now, though only in the last few months have I started thinking about why I do so. I decided to get some thoughts on this written down. Some of this may make it into the artist’s statement about the work.

I checked back through my Lightroom library of lost items to date the earliest entry: May 2012. At the time I was in the midst of what would turn out to be a four-year photo-a-day personal project, and the motivation to find something new to photograph every day, even when you go to all the same places every day, led me to make more of an effort to pay attention to the smaller details of my surroundings. At first I was attracted to particularly unusual items that people had left behind in public (snowman costume head, anyone?) but gradually starting noticing more everyday items too. 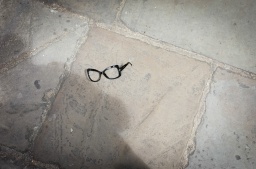 I recall discussing this with another student early on and musing that the interesting aspect of finding someone else’s lost property was possibly imagining the story behind it. However, as time went on and I gathered more photos I realised that I wasn’t actually curious about the owners at all – I was attracted purely by the sight of the item in public. Each find was fulfilling some kind of internal need. I was collecting… something.

After a while and once I had a decent-sized collection of lost property photos I began to realise which ones interested me and which ones didn’t. The items generally fell into three categories:

I eventually worked out that what really interests me is putting myself in the position of the person losing something – not so much for the specific story behind the loss but the state of mind: of being absent-minded. I like the challenge of depicting human behaviour without showing people, and this falls into that category really well, I think.

With this in mind it’s clearer why I focused on the first category. Toys are dropped by children and I didn’t identify with that (not having any of my own, or having been one myself for several decades); and the peculiar objects seemed to me to each have a distinct story attached, one that I could only imagine. The scarves, hats and gloves, however – I’ve done the same; I identify with the situation; they speak to me…

So generally speaking, seeing lost property in public reminds me of my own memory lapses. The next question is…

It became apparent early on that the kind of object I was seeing most of was the single glove, accounting for nearly half of my collection. This is a practical point underpinning the remainder of this justification – there’s just lots of material out there. People take their gloves off and stuff them in a coat pocket, but not quite far enough. One falls out, unnoticed. It happens a LOT, believe me. You start seeing them everywhere.

There are however interesting associations that one can make with gloves, and at least some of these feel like they might subconsciously have been influencing me.

First, the glove as metonym. A glove represents the hand, a body part that probably does more to indicate human emotion or communication than any other part of the body apart from the face. The hand is a tool of gestural language. A glove, by extension, can carry indications or implications of gesture by the way they are positioned. A glove can wave, point or clench into a fist. It comes back to what I said earlier about suggesting human activity without showing people. 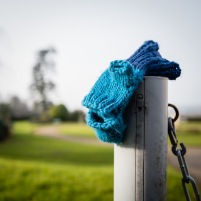 Second, the glove as metaphor. A glove can represent positive emotions: warmth, security, being part of a couple. Losing a glove can accordingly symbolise losing these positive associations. Whilst I am not aiming to concur up these specific emotions with this set, i am trying to tap into the sense of disorientation that I believe is inherent in losing a glove.

Finally – and this is the hardest one to articulate, but I’ll give it a go – the loss of a glove as an additional level of metaphor. As a glove is one of a pair, losing one is more frustrating than losing a single item such as a hat. If you had a hat, then lost a hat – OK, fair enough, go buy another hat. But lose one glove and you still have the remaining glove, now useless and taunting you, there as a reminder of that time you lost something. If you throw away the remaining glove, you now have the memory of both losing something and having to throw away something unnecessarily. It’s quite a different mental experience than losing a single item. I (over-) think so anyway.

Later in the same day I wrote this, by complete coincidence I heard the following line in a poem:

This simple line helped to clarify what I was struggling to say in my last point above: the particular disorientation of losing one glove is that it is a partial loss that leaves behind a trace.

This train of thought led me to a realisation:

The lightbulb moment came when I realised that the series of photographs isn’t quite ‘about’ what I thought it was about… it’s not so much about memory lapses as it is about remembering memory lapses – dwelling on them, overthinking them.

To break it down:

This deeper level of understanding of my underlying intentions makes a lot of sense to me, and links back to something I said right back at the beginning of Level 3 about the reasons I became interested in memory as a subject: “my increasingly unreliable memory is a source of ongoing fascination and self-analysis (and occasionally concern).” (me, 2017).

6 thoughts on “Assignment 3: Why lost gloves?”