I’m doing more photographing and thinking than blogging recently, so this is a post to summarise what I’ve been up to recently, and what my plan is on getting from here to submitting Assignment 4.

Getting back at the desk instead of behind the lens is partly an enforced decision, as a few weeks ago I got diagnosed with lateral epicondylitis, a form of tendonitis more commonly known as tennis elbow – or in my case, camera elbow, as my camera body and lens of choice weigh about 1.5kg / 3lb. Ouch.

Some of this is simple enough to summarise here, other bits will link out to more detailed posts of their own.

Before I crocked my elbow I took a camera, lens and lighting with me whenever I left the house for about six weeks or so (since then I’ve still been making occasional trips out with photography kit, usually with a lighter camera/lens combo and/or a monopod). 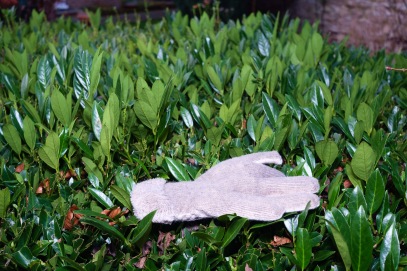 The outcome of this is that I have about 20 new images that I am (reasonably) happy with. Some I really like and feel they will fit, others I am less enthused by but can see specific aspects that I think might work in the overall set – but it feels like I am finally building a new collection of images that better suit my intended outcome. Maybe only a handful of these all make it into the final cut – it’s still very much evolving.

Based on discussions with other students, my own musings on the subject and lots of research into other practitioners (of which more later), I’ve been stretching the boundaries of the work in a couple of ways.

First of all, I’ve been taking many more images of each glove scene, working different angles, distances, compositions and lighting approaches to give me more options to select from. I adopted a rule of thumb that I should be able to find at least 10 variations of each scene.

Secondly, I started tweaking my underlying principle of non-intervention from the last version of the project. I rationalised that this is not intended to be a documentary or typographical project and that the ‘authenticity’ of leaving all gloves exactly as I found them is something that has little effect on the intended viewer reaction.

To this end I began to (sometimes) move or adjust gloves for photographic effect. In other instances I have actually planted gloves in a scene that I liked the look of. I am not planning to reveal which images are as found, adjusted or completely staged. I no longer think it matters…

This is a blog post in itself (maybe more than one) but the short version here is that I have been looking at two strands of research and am trying to navigate my way between them:

The quick takeaway is that the more I see of similar projects (in terms of subject matter), the less I want to look like them!

In brief, I want to be less deadpan / typographical and more creative / evocative in my execution. More to follow.

This is the least tangible aspect of what I’ve been doing on this project recently, and the hardest to articulate. Some may say that I am overthinking this at too early a stage, but it feels right so I am carrying on…

Basically I have started thinking about how I ultimately want viewers to experience the resulting body of work, and what messages I want to get across / what thoughts or emotions I wish to evoke. I don’t feel like this is something that can wait until the Sustaining Your Practice module, I need to be planting the seeds of it now.

Part of this is about what form the output will take: an exhibition? a book? something else?

Although I produced a small book dummy for Assignment 3, when I close my eyes and imagine people viewing the work, it’s in an exhibition environment. The images are printed large and borderless, spaced apart on the walls to encourage viewer contemplation. I want the images to be visually arresting in their own right, so they capture the viewer’s attention, and I want them to warrant sustained viewing, with the viewer noticing additional details as they peruse each image.

Whilst viewing the images, I wish to give the viewer a sense of recognition of a particular (universal) sensation: realising that they have forgotten something.

I really want the viewer to take these images as a catalyst for thinking about their own memory lapses. I want to get across the idea that our memory is less reliable than we think.

Working backwards from this visualisation gives me some direction for how to capture (or construct) the images.

I wouldn’t mind building up a longlist of maybe 50-60 images to select from. I’ll keep taking new pictures throughout the rest of this current assignment stage.

Write up my research

I’ve been looking at lots of other practitioners and projects but not writing about my findings. I need to get it down in a blog post or two.

The key to the work is the juxtaposition of text fragments with the photos, but I’m still not sure exactly how this is going to be presented. The last (book) version of the project had text on the facing page. I’m thinking of variations on this approach, and also considering experimenting with text in the images themselves. This could be typed or handwritten. Lots of things to try.

Aside from the text pairing aspect, I need to think about (experiment with) things like: what overall aesthetic do I see the work having? What about sequencing – e.g. will there be an element of narrativity? What reactions / emotions do I want to evoke? How do I imagine people describing the work, e.g. what adjectives do I have in mind for the work?

A set of answers to the above (and other) questions will help to direct me towards the next version of this body of work.

4 thoughts on “Building up to Assignment 4”