An exhibition of paintings for a change. It’s good to broaden one’s horizons! I also might have a blog post coming up about a sculptor at some point.

I was in London to see the All I Know is What’s on the Internet exhibition at the Photographers Gallery, and as I found that to be slightly underwhelming I decided to find something else to make the trip worthwhile. I had timed the day badly in terms of major photographic exhibitions: I was one day too early for the new Don McCullin retrospective which would have been my first choice to pass the afternoon.

This Pierre Bonnard exhibition appealed to me for a few reasons. Firstly, the venue: I do like Tate Modern as a place and generally find spending time there worthwhile and inspirational. Secondly, the title: as well as being admittedly fascinated by memory, I am increasingly considering the use of colour to be a key facet to the work that I like and would like to create myself (I was hoping that The Colour of Memory wasn’t just a throwaway in-the-absence-of-a-better-one title but something more significant; thankfully, in the end I felt it was a perfect title). Thirdly, a painting tutor I know on Facebook raved about it (hi Bryan!).

So despite the eye-watering admission price, I went for it.

What I hadn’t been aware of (to be absolutely honest I wasn’t familiar with Bonnard’s work at all before I saw the publicity surrounding this exhibition…) was the extent to which a painter could have an approach and an aesthetic that could be so much informed by photography. There are innumerable examples of photography that imitates painting as an art form, but it’s a little harder for me to spot the inspiration going in the opposite direction, particularly in the era in which Bonnard worked.

Bonnard’s work came across as photographic in a few different ways. His choice of subject matter, for a start. He captured small, everyday moments that wouldn’t immediately strike one as being ‘worthy’ of immortalising in paint; there are countless images of his beloved partner and muse Marthe casually bathing or dressing. He painted scenes from their daily life in the same way as a lot of obsessive photographers capture their domestic lives in photographs. 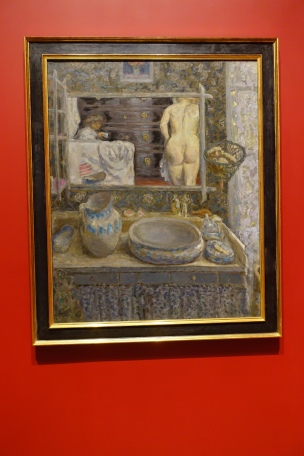 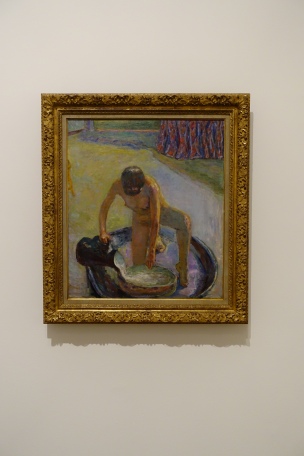 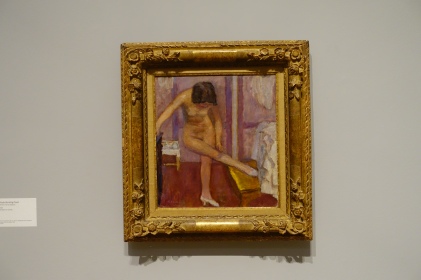 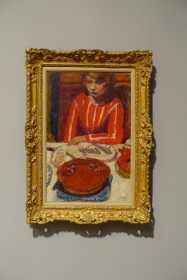 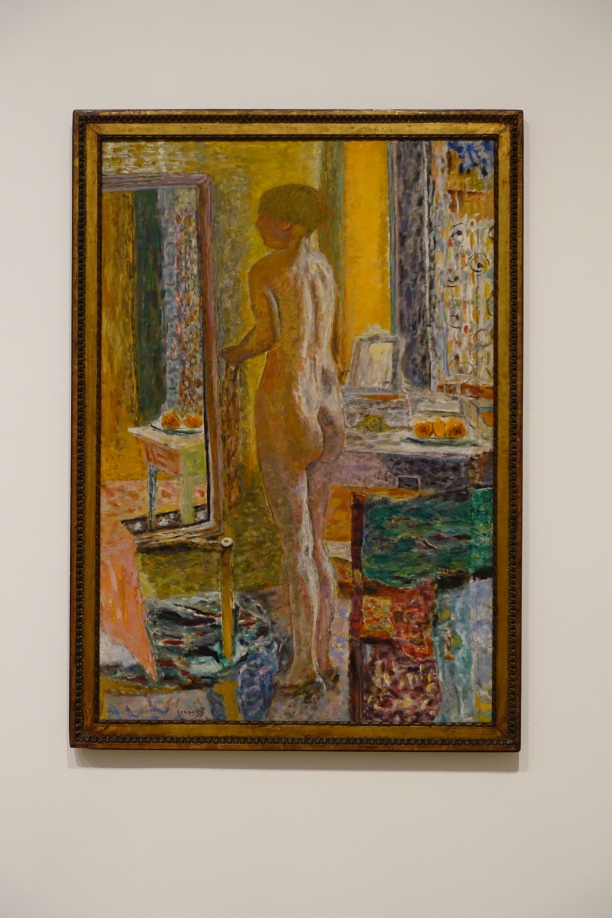 Compositionally, a lot of his paintings seem to me to resemble a photographic aesthetic. He includes frames-within-frames quite a lot, for example. Also, some of his street scenes have (to this eye) quite odd placement of figures, such as people walking out of the frame – again this makes them resemble painted photographs, informally snatched moments in time. 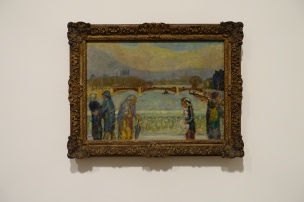 It becomes apparent from the text introducing each section of the show that Bonnard was interested in photography and in his early career took photographs as source material or inspiration. Later he set aside the camera, claiming that through practice he had become able to fix a scene in his memory.

This brings me to the aspect of the work that I found most fascinating and most relevant to my own practice: the underlying sense of memory in Bonnard’s work.

One of the distinctive aspects of Bonnard’s work is that he would often take months or years (in a few cases, decades) to complete his artworks. He would often start a painting and then set it aside for extended periods, returning to it and using only his memory to provide source material for the painting in front of him. In a sense, he painted his memories rather than the original scene that inspired him. And his memories often manifested themselves as much more colourful and vibrant than the original scenes.

To me this speaks to a crossover between art and the science of memory: that a memory is, in effect, closer to an act of imagination than an act of recall. Memories are not stored whole like photographs or videos, they are reconstituted from fragments in the mind.

In the mind (and subsequently the paintbrush) of someone as creative as Bonnard, a recreated memory can be infinitely more vibrant and saturated than ‘the real thing’. He used such an unconventional, hyperreal colour palette that as a viewer it feels like gaining an insight into how he saw the world – or rather how he remembered the world.

The selection is a little flawed in places; Bonnard was eclectic in terms of subject matter and perhaps inevitably some of his works come across as more successful than others. I found his landscapes less interesting than his domestic scenes, for example, as they felt less personal and therefore less distinctive.

Firstly, that I can get a lot more out of visiting painting exhibitions than I expected :-)

The parallels between painting and photography, and between art and memory, made this a really fascinating experience for me.

Secondly, context is crucial… just to step back for a moment and analyse my own critical reaction to the work:

My reading of Bonnard is almost entirely predicated on the knowledge that he painted from memory. Without this nugget of information my interpretation of his entire oeuvre could have been quite different; maybe I’d have decided that he just loved garish colours?

So a side-point from this experience: the contextual framing of art can make a significant difference to how it is viewed and interpreted.

2 thoughts on “Exhibition: Pierre Bonnard – The Colour of Memory”