This is actually a review of The Democratic Forest: Selected Works (2016), an edited selection of what is, in its complete form, a 10-volume set of over a thousand photographs taken by Eggleston over the 1980s. I didn’t have the £420 spare for the full set.

I’ll start by saying that up until this purchase, I didn’t really ‘get’ Eggleston. I’ve had his Guide (1976) for a few years now, and I just didn’t grasp what was so great about it; it seemed to me that a lot of the positive critical reaction was a function of the time of publication – the novelty of colour in art photography? – and the images themselves hadn’t dated as well as I had hoped. Rather than getting excited by the use of colour, I detected a sense of melancholy and inertia in his compositions.

A couple of years ago I saw an exhibition of his portraits at the National Portrait Gallery in London, and found it more engaging than I’d expected, as I hadn’t really had him down as a portraitist – well, he isn’t in the traditional sense, as the majority of his sitters were friends or acquaintances, and the shots were generally loose, candid and informal. He’s not a portraitist like Avedon or Bailey, that’s for certain. But I still didn’t quite get what the fuss was about.

So I took a bit of a punt investing in The Democratic Forest: Selected Works, but it paid off. This is already on my list of favourite photobooks. This time, it clicked – I ‘got’ Eggleston.

What I got a sense of immediately, and subsequently on repeated viewing, is that this rather than Guide is where Eggleston’s mastery of colour is centre stage. Where the big deal about Guide was supposedly that he took photos in colour, here it comes across much more that he was taking photos of colour. The colour palette is, in many of my favourite photos in the book, the real subject matter. 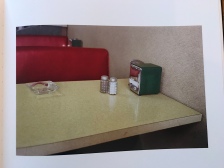 W. Eggleston, from The Democratic Forest 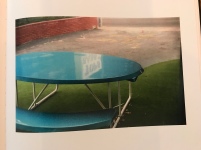 And it’s not just the colours, it’s the shapes as well. His eye for composition in this set is exemplary. He finds vantage points that render scenes into blocks of almost geometric arrangement. He uses diagonals a lot, I noticed; there’s a greater sense of depth and movement in these images than in the static, almost claustrophobic Guide.

The colour blocking, combined with the lack of people (in most of the collection), leads to a look that I can best describe as ‘uncanny simplicity’. He seems to be able to distill a scene down to its important parts by his compositional choices. It’s almost as though he edits the world around him within his eye before he even lifts the camera to it.

This look appeals to me a lot. I find it very visually engaging, its simplicity sometimes bordering on abstraction (some of the images remind me of Franco Fontana, who takes the simplicity / colour blocking concept further towards abstraction).

This simplified composition approach has a dream-like quality; or perhaps even a memory-like one. Scientific theory suggests that our memory misses out a lot of details when recalling scenes, events and people; there’s a necessary jettisoning of less critical information. Eggleston’s best images here make me think I’m looking at his memories of scenes rather than the real life version in front of his camera. Perhaps strangely, I felt he has this in common with Pierre Bonnard.

I can certainly say that this book has proven to be inspirational, but perhaps in a combination of direct and indirect ways. I wouldn’t say that after this I want to go out and just imitate the Eggleston style (who could? Simplicity isn’t easy…) but rather that it has given me ideas on how to apply similar thinking to my own work.

The main thing I need to try to put into practice is to find simpler views on the images I capture, both in terms of colour palette and composition. I say this not just because I personally find such images aesthetically pleasing, but also because I feel that such ‘uncanny simplicity’ could really support my own artistic intention – I want to make my own images more memory-like, for the experience of viewing them to be more akin to remembering than looking. I think I can hopefully learn a thing or two from this Eggleston collection, without directly aping his style.