Continuing my response to the course notes in Part Three, following my musings on ‘levels of meaning‘… the next bit covers editing and sequencing the images.

I have been editing and to a lesser extent sequencing the images as I have been going along, with various edits and sequences at various stages of the work in progress.

Big picture: my total image catalogue for this assignment is a whopping 819 photographs. A large chunk of this derives from my more recent decision to take multiple pictures from different vantage points and focal distances as much as possible, to give me more options at the selection stage; I was regularly taking 10 or 12 versions of each glove site in the latter stages. By the end of Assignment 3 the longlist was 83, so I certainly gave myself plenty of options since starting the Assignment 4 version of the concept.

However, once I really focused on the assignment I found it fairly straightforward to whittle it down to a working shortlist of 25 source images (i.e. before the projection stage), using some visual criteria such as colour palette, figure-to-ground ratio, compositional geometry etc. 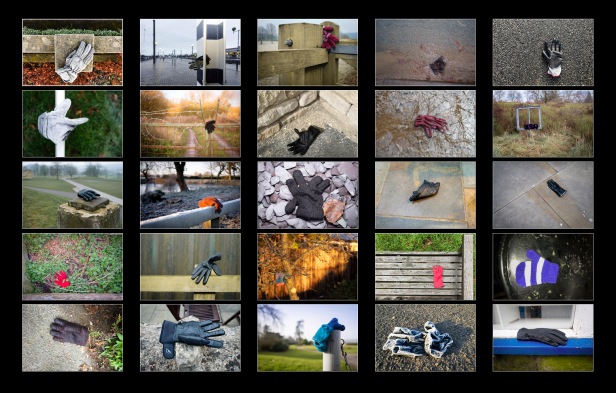 This set had 10 photos from Assignment 3 that I had considered re-using.

I whittled it down further to 20 for the projection stage. Only five of the Assignment 3 set survived this edit.

The notes also say this on editing:

As the work has gathered momentum, ideas and gravitas, some images which were important earlier in the process become redundant to the final purpose. This can be hard to accept, especially when you’ve become attached to them and have particular favourites.

I certainly found this to be the case, as a couple of personal favourites made it all the way to the study visit critique session before I finally realised that I had been holding on to them longer than necessary. 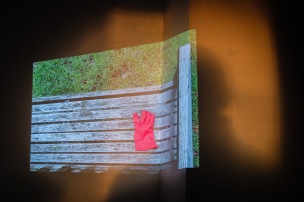 In both cases it was the colour palette that jarred too much with the rest of the set.

By this stage I had my 14 chosen images (as a fairly obscure aside, I chose 14 as the final number once I’d decided to separate the text fragments off into an introductory page, where I noticed its resemblance to a poem, so I decided to pick a standard poetry form to enhance this visual trick – and a sonnet has 14 lines).

By this edit, only three images come from the original Assignment 3 final set, albeit now in varying degrees of ‘constructedness’ / manipulation:

I had in mind a first and last image for quite a while, and ultimately stuck to these decisions. I wanted to start with the first image directly above, the shiny leather glove on a pavement, as probably the clearest/simplest composition of them all, and I wanted to end with the grimiest, least recognisable glove.

In this way I had envisaged a loose element of narrativity, a sense that the memory (faculty) being depicted here deteriorates over the course of the series – that it all leads up (or down?) something slightly dark – both literally and in terms of the sombre mood. There is, I think, a pleasing symmetry to the colour palette in these two.

In between these two poles there isn’t a direct degradation in terms of clarity or colour palette, more of a general journey towards a kind of ‘mugginess’.

In particular I wanted the last few images to have more of this ‘murky’ ambience.

Other than the first one and the last three then, the selection is more a case of getting a rhythm of different aspects, e.g. I tried to alternate urban and rural settings, and vary the size of the glove in the frame.

I also tried a few variations on sequence according to the projection effect: there were some similar surfaces that I kept apart from each other to avoid direct repetition, and I did a similar thing with screen shapes – straight on vs angled vs distorted.

To repeat the final sequence from higher up the page:

Just one more course notes blog post to do, on the use of text, then I should be ready to submit…