For the fourth year running I got to spend a few days at the Rencontres de la Photographie in Arles, France. It’s the 50th Arles festival and there are 50 exhibitions in total, so I didn’t manage to get to see everything. I did however see lots of interesting and inspirational photography. And this year I got to spend much of it with a couple of other people instead of being on my lonesome! So thanks to Helen and Matt for the company, conversation and dining companionship.

Summary review: significantly better than last year, which I thought was too dominated by documentary photography; more of a mix of genres and approaches.

What I’m always looking for in any exhibition is the sense of “oh, I hadn’t thought about that” – I enjoy work that is thought-provoking in a very literal sense… work that plants an idea or insight in my head that wasn’t there before. This is the thread that runs thorough the work I appreciated and engaged with the most.

The festival is huge and I didn’t even get to see all of it. For ease of reading and page loading I have divided the overall festival review into three categories of my own invention:

The first group of exhibitions can loosely be gathered under a heading of archive or retrospective. They are historic to some degree, albeit only going back as far as the 1980s in some cases. Generally speaking most of this kind of work doesn’t move me very much, beyond historical interest. But there are exceptions to that.

This small but perfectly-curated body of work was an unexpected delight. The premise is deceptively simple: images of female family members, taken by Tom Wood on Merseyside in the 1980s and 1990s. Most were unposed, all were taken in public, so there’s a real informality to the images. 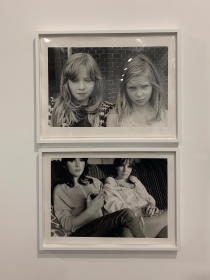 The blurb talks about Wood’s interest in ‘family resemblances’, and this is something that comes through really strongly. He captures not only physical characteristic that the mothers / sisters / daughters have in common, but something more subtle and maybe more profound – he captures how female family members learn off each other, maybe subconsciously. You see girls wearing the same kind of clothes as their older sisters, daughters who pose for the camera just like their mother. You see how behaviours can get passed down between women and girls, you see how the younger ones look up to, and take their cues off, the older family members.

This is something I hadn’t really thought about before, but Wood’s images made it suddenly crystal clear. He has illustrated something that you wouldn’t have thought was particular easy to photograph – the bonds between female family members. A really enlightening exhibition, in a quiet way.

Jarcovjakova documented her ‘outsider’ lifestyle on the edges of society in communist Czechoslovakia. The aesthetic is gritty black and white, and the subject matter is the stuff of daily (and nightly) life for her circle of friends, i.e. sex, drink, drugs, clubbing and lots of other things frowned upon by the society of the era.

Parts of it are closer to pure archive – snapshots of a place and time (Prague, 1970-1989) that are historically interesting but lacking a distinctive vision; quite traditional ‘outsider documentary photography’ (drunk naked people in grungy bedsits etc). Other sections I found much more engaging, where the sense of an individual photographic vision came through more strongly. 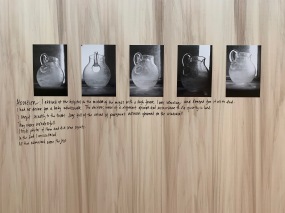 The section where her images are accompanied by transcripts from Jarcovjakova (diary entries?) made the strongest impression on me.

Thematically similar to Evokativ but a group show, this covers a similar time frame in a different Communist society. Being a group show it is maddeningly inconsistent; some is run-of-the-mill gritty b/w sex-drugs-rocknroll documentary photography, but in others a distinctive voice comes through. 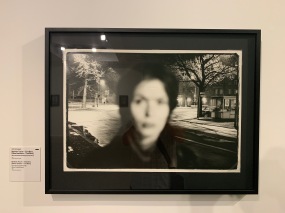 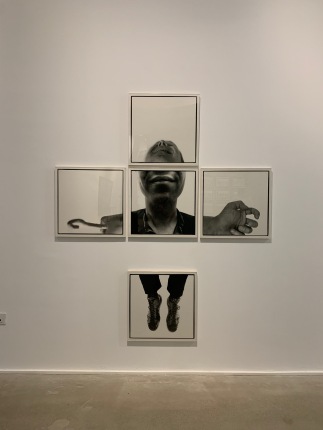 Kurt Buchwald’s Unsharp Portraits series subverted the environmental portrait trope by focusing on the background, and Thomas Florschuetz’s fragmented body parts made interesting shapes on the gallery wall – both of which amused me enough to make this one worth visiting.

This is a collection of images from four photographers from a late 70s / 80s alternative art movement in Madrid known as La Movida. The only member of this scene that has entered my consciousness before now was the film director Pedro Almodovar – seeing him in the context of a wider art movement is informative.

At the time I didn’t consider this show a highlight, but looking back at the images and revisiting the exhibition catalogue, I realise that I enjoyed it more than I thought. It’s not particularly deep conceptually – its strength is in its energy, vibrancy and sense of optimism and modernity. The nearest equivalent I can think of is the British punk explosion in the late 1970s, though La Movida was a wider art movement. 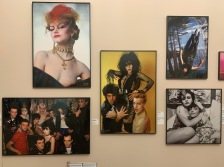 My abiding takeaway from this show is the sheer kinetic energy on display – largely through vibrant, oversaturated colour palettes but also through quirky props and compositions. From a contemporary standpoint a lot of it could come across as self-consciously ‘wacky’, but I get the sense that the both the artists and the subjects had a genuine sense of optimism that spills over into the photographs.

Another archive / group show, this time around the Motown music phenomenon through the 1960s and 70s. Quite simple in scope but eye-opening in content, particular around the language and imagery of segregation of parts of the USA in the 1960s. 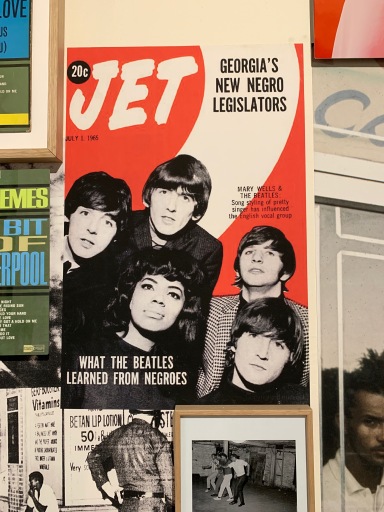 While the photography wasn’t specifically distinctive, the subject matter it recorded was interesting enough to hold my attention. I came away realising how much more political Motown was than my sanitised impression of it. And this exhibition had the best background soundtrack of the whole festival, of course.

This is your classic Arles ‘big name archive’ show. Such shows don’t usually do much for me, and Levitt’s kind of black and white vintage US street photography is something that I don’t generally have much interest in. That said, I found more to like here than I expected. I hadn’t realised quite how much of a distinctive eye she had. She took a lot of images of children playing, and her eye for such scenes comes across as different to her male contemporaries. 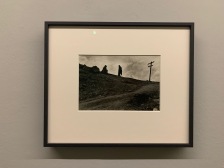 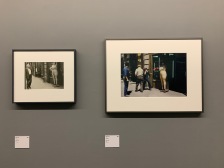 A couple of her images stood out as being really interestingly composed, such as the vertical stack of people in the image above, or the diagonals in the hill scene. I got a sense of geometry in these that reminded me of Cartier-Bresson.

There was a pairing of images that I found quite fascinating: on the same day in 1988 she took images of a mannequin outside a shop, in black and white and in colour. The former features a man in an old-fashioned suit and bow tie, while the latter features clearly contemporary people. The black and white shot looks like it was taken in the 1940s. No major insight here, just interesting to see the temporal optical illusion possible through colour palette and style of dress. The images look like they were taken decades apart.

A group show themed around the publication in the mid-70s of three groundbreaking feminist photobooks.

Eve Arnold’s The Unretouched Woman (1976) is a collection of unposed and unretouched images of women, famous and unknown. It’s a diverse mix and that seems to be the message to take away – that there is no defining archetype of the female human, certainly not one decided by a male-dominated society. 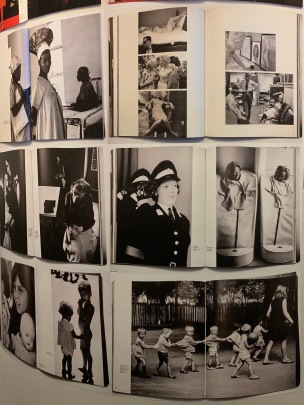 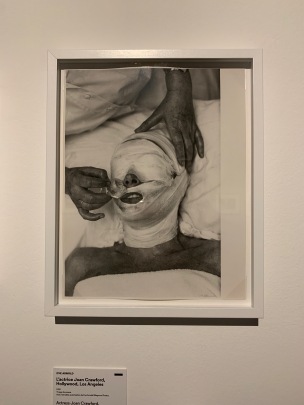 Susan Meiselas’s Carnival Strippers (1976) is a project I was familiar with but had never seen in such a full presentation. Most memorable was the juxtaposition of two images of one particular stripper, Lena, on her first day and again in her third season. The space between the two photos implies a whole narrative. Overall an interesting historical document but not much more.

The most interesting of the three by far was the one I hadn’t previously been aware of: Abigail Heyman’s Growing Up Female (1974). Its subtitle is ‘A personal photographic journal‘ and this diaristic, introspective approach made it more distinctive and engaging for me. Heyman examined her own life experiences and those of women around her and used this approach to question women’s confinement in stereotypical gender roles. It comes across as a more personal and thought-provoking variant of the Arnold work, which took a broader sweep. 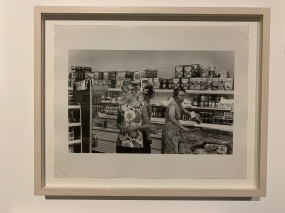 The most striking pairing is the image entitled ‘Making love‘ above the patient’s-eye view of an abortion procedure. Occasional images hit a lighter note, such as the supermarket photo of shoppers in curlers, but the overall tone is depressingly harsh. Due to the highly personal nature of the story being told I came away feeling that I better understood the lived experience of women in that place in that era (and wondered how genuinely different it is four decades on). It’s one of the exhibitions I found myself thinking about long afterwards.

This one was great fun, mostly for the imaginative staging. The basic premise is the finding of a box of anonymous slides of family snapshots by filmmaker Lee Shulman, who collected more and more of them until he had a collection that presented a kind of archetype of the family home. 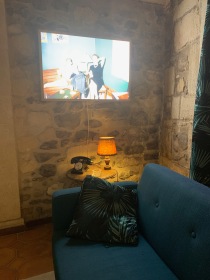 The venue is a formerly derelict house and the presentation is basically the projection of images into room sets forming a typical (albeit quite retro) family home. As a celebration of snapshot photography it works really well, especially placed into context in this installation format. It could have ben quite cheesy but in fact I thought it was a triumph. Warm, friendly, nostalgic – quite an antidote to some of the more serious and fraught subjects covered elsewhere in the festival.

I was looking forward to this, with a certain amount of trepidation, as it’s a French curator’s view of British homes. Like any group show it it’s a bit of a curate’s egg, but the good parts are very good indeed.

I found much of it a Proustian time-hole back to my working class northern English childhood, in various ways. The more interesting series were the more conceptual ones such as My Mother’s Cupboards and My Father’s Words by Anna Fox, or Karen Knorr’s Belgravia series – both of which juxtapose text with images, something I’m still grappling with in my own work.

While most of the photographs on show were genuine candid images of home environments, every now and then there’d be a body of work that stuck out like a sore thumb, such as Juno Calypso’s highly constructed tableaux, or Edmund Clark’s Control Order House, which is about house arrest, not home life. So some odd curatorial decisions there, quite jarring.