This is an introductory post, even though I apparently already have 80 followers (!!) for this ongoing blog. I used this blog space for Body of Work and have decided to continue using it for Sustaining Your Practice, although all posts for SYP will be separately categorised and accessed via its own navigation menu. This made more sense to me than starting a wholly separate online space, given that SYP is intended to be an extension of BoW. On a practical level, it makes cross referencing back to BoW content easier for both me as author and for any readers still following my progress.

There’s been a short break between completing BoW / Contextual Studies and starting SYP; I know some people overlap them, but I felt that I had enough to focus on between BoW and CS, especially as I’d needed to request an extension in the middle of last year due to stuttering progress on the former. I completed CS in July and BoW in October last year. I spent a little of December and most of January preparing BoW and CS for assessment submission. I await news in April sometime on how I did on those two course modules.

In November and most of December I set all OCA work aside for what I think is a justifiable reason: I relocated from the UK to live in France. I mention this as it becomes relevant later…

If you’re not an existing follower :-)

My BoW subject is memory, specifically the unreliability thereof. More specifically still, I examined the interplay of a couple of particular unpredictable aspects of the human memory system:

After a rocky start trying and rejecting a couple of different ideas, I landed on an approach that combined visual metaphors for forgetting with text fragments relating some memory lapses of my own. I worked this idea up into the final BoW portfolio. 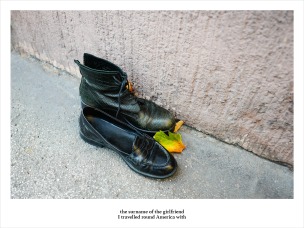 In the portfolio submitted for assessment this was a set of 15 images, although the series could evolve and/or expand.

Getting on with SYP

Without formally starting to work through the SYP course itself, I have read through the handbook and started mulling over some of the contents in the background. The following summarises my thinking so far, my particular concerns and my tentative plans.

My thinking at the end of BoW

As part of Assignment 5 of BoW I wrote an evaluation of that course, part of which was a look forward to what I wanted to do with SYP.

Back then I was more inclined to have my SYP ‘publication’ to be a book rather than an exhibition, although I hadn’t ruled out the latter. This was partly due to the concerns summarised below. However, three-and-a-bit months later I find myself more open to the idea of an exhibition after all.

This is something I need to work through in the near future; if I do decide to go down the exhibition route, I have been warned by other students of the potential long lead times for organising one.

I have one general and one specific concern about how SYP is going to unfold for me.

The general one is quite simply that I am a little nervous about showing my work to industry professionals for portfolio reviews! I know that this is something I need to do, not just for the course but if I want to continue to produce work in the future, but the prospect does make me somewhat anxious.

This not a compliment-fishing expedition. I have received good feedback on the final portfolio from peers and more significantly my (quite demanding!) BoW tutor. My concern is stepping outside of the academic bubble into the wider art world. Although I got comfortable during the latter stages of BoW with the notion that the work is an expression of my ideas rather than a ‘puzzle’ to be solved, I confess I am reverting to worrying about whether people will ‘get it’. Interestingly, I am OK with the idea that viewers of the end publication might not wholly ‘get’ what I’m expressing with the work, but I definitely have a slight hangup about being ‘judged’ in a one-to-one situation by ‘those in the know’…

The solution to this is, I think, twofold. Firstly I need to hone how I introduce and contextualise the work. Secondly, I need to just get over myself and show the work! Feel the fear and do it anyway, and all that.

The second concern is the specific and more practical one. As mentioned earlier, I moved to France towards the end of last year. My photographic network, such that it exists at all, is based in the UK. Though I plan to get back to the UK for about a week a month, that still means I spend 75% of my time in a new and less familiar country.

It becomes a bigger issue if I am to move more towards an exhibition as the key SYP publication, rather than a book. I will need to make a decision on whether to aim to put on an exhibition in the UK, where I spend a minority of my time but do have at least a semblance of a photographic network, or in France where I spend most of my time but have zero photographic presence or network so far.

An additional consideration on the UK vs France question is that the work relies heavily on the juxtaposition of image and text – and the text is all in English. If I choose to exhibit in France, do I translate the text? leave it in English? add French translations as separate caption cards? Questions, questions…

This is how I intend to take SYP forward from this point:

11 thoughts on “SYP: Getting started”