This is the first of a few posts to document prep that I have already done for Assignment 1 over the last few weeks but neglected to blog about. Starting with: my personal photography website.

I have had a personal portfolio website for quite a few years now and it has taken various forms. Up until recently it was a mixture of personal projects and OCA degree work that I was particularly pleased with, but it lacked coherence.

I mulled over whether to set up a totally separate online presence for the Remembering Forgetting body of work but ultimately decided against it. I already have a good domain name based on my actual name (I had the sense to buy robtownsend.com many years ago) and decided to tweak the existing site to showcase the L3 Body of Work whilst still housing other projects as well.

I went with a big, almost full screen, image from the series on the home page, plus some short introductory text.

Once the viewer clicks on the image or the text link underneath, they are taken to a dedicated project page for Remembering Forgetting: 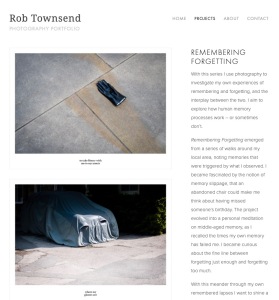 The page includes some contextualisation text in a sidebar.

I added all 15 images from the final BoW portfolio. I mulled over this: should I include everything? A selection based on my own favourites? An edit that keeps the gist of the narrativity? In the end I decided to upload the whole lot. I still see the current edit as a whole set and find it difficult to remove some. I have tweaked the sequence very slightly however.

In the first version of this new site I had the navigation divided into ‘Memory’ and ‘Other Projects’. The former had the various BoW projects and the latter was the mish-mash of personal projects and L1/L2 work. However, the advice from the tutor was that dividing the projects in this way was counter-productive; the ‘Other Projects’ nomenclature risked dismissing these works as secondary, an afterthought.

His view was that some of the ‘Other Projects’ were in fact rooted in memory as well, and that there was a more coherent thread running through most of my work than I was giving myself credit for.

I had another look through the ‘Other Projects’ and removed quite a few of them (as too much of a stretch to crowbar them into the umbrella of ‘memory’) but recognised that Garry had a point and that some of them are, in hindsight, very much investigations around aspects of memory.

For example, at Level 2 I did projects looking at loss and public grief. There’s a clear link to memory (remembrance) here. Even a project I did about the oversimplification of the public discourse around Brexit took as its starting point five towns that I used to live in at various parts of my life – so I was using my memories of those ex-home towns as the canvas.

Looking at my overall work through this lens was an interesting exercise, so I’m glad of Garry’s advice there.

Final touches: on suggestion of another student, the old typeface I’d used for my name was a touch frivolous so I changed it to one with a little more gravitas. And I updated my ‘About’ page to be more of an artist’s bio style text (although this is very much a work in progress).

I’m pleased with the updated site but welcome any feedback or suggestions!